Have to ‘pen’ this down while its still in my head. I had my most weird and ‘historical’ly international dream last night. Here goes…

I was in Thailand with a relative. We walked into a spa where my aunt suggested that I should get myself a massage. The spa attendee (I am not sure what you call them) took sometime to get my session arranged. So while my aunt waited at the spa lobby, I was taken inside, passing through a corridor which merged to a larger hall. On my right there were 2 big pools. Not exactly the spa/jaccuzi type but not the standard pool as well. I thought it was suppose to be quiet, but no, there were both adults and kids in the pool. And also babies ! What kind of spa is this I asked myself.

I was ushered to a smaller jacuzzi while waiting for my masseues to get ready. Observed the noisy crowd in the pool in front of me. The pool next to it had less people. It looked deepe. Maybe that’s why. Saw a guy making his way to the crowded pool. Funny. He had a helmet with lights on top.

My observation was interupted by the masseues who was ready. The massage room had high ceiling with tall stained glasses (yes the type you see in churches). The colour? Think gold and brown, think Louis XV and Palace of Versailles in France. Yeah, looked something like that. And I on the apprehension of this went like ‘Woww’. Inside lah. Didn’t want the masseues to be distracted. LOL. Masseues looks familiar as well, but I can’t remember where.. (not that I don’t remember NOW as I am writing this but in the dream itself I couldnt recall!).

I was just about to climb on the massage bed when chaos struck. The glass wall shattered as if getting hit by small solid objects flying towards it. The spa visitors seem to have disappeared as I switched my attention to the open square outside the room I was in. There was no more wall, only the tall beams holding the structure of the building I was in. I watched in horror as women in Ao Dai (Vietnamese national costume) scurried for safety together with their bicycles and non la(the pointed leaf hat). Old men pushing their rickshaws away from the open as it was their source of income.

All these took place during the night time. I know I was not in Thailand anymore, but in Vietnam. The fire flares from the army machinery and street lights made the night both ‘black and orange’. Well at least from my visual sense! I didn’t run away but stood at one corner watching the chaos in the square. There were armies in black shiny boots and dark uniform passing by on foot. German SS ?? Could it really be true ? Certainly not the Gestapo. Which century am I in? Warped to 1930 to Hitler’s time? I was confused, well literally. Was more confused when a black, darkly tinted Mercedes B-class (the mpv yo!) passed closely next to me towards the infantry which was marching on the stone paved road towards the direction where I was.

I wonder if the driver of the Merc was blind. He(or could it be a she) drove so closely to me I jumped causing my sandal to fly. Beneath the car. I manage to scoop it with my legs as the car silently cruised by.

Some sort of coal machine used to generate power came into scene.. The workers were making a lot of noise. Then something went wrong. The trolleys on the railway leading to the tunnel stopped moving, the lights on the street started to flicker before dying. I felt I was in England. Old England. Perhaps a century before Hitler.. Boy, this dream is taking me back to wild times and places it can’t quite make up it’s mind where to go. But I remember walking back to the spa and asking the front desk for my money back because I didn’t get the massage. The lady told me my aunt has not paid, and that they are wavering the payment. My aunt was no where in sight. :p

I woke up, back to my real senses, grabbed my iPhone and hurried to jot my words, before this unique dream of mine is lost in time, forever. Yes, blogging yet again via phone and wifi while lying down and all relaxed on this beautiful Saturday morning. Have a great weekend folks !!! 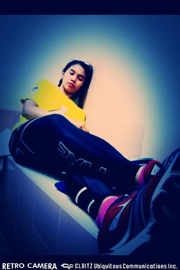