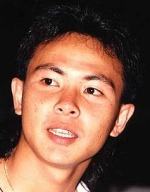 Okay, hands up any of you who did not catch the Indonesia vs Malaysia quarter final match 2 nights ago? We won 1-0. thanks to the goal from Syahrul Azwari. Catch the telecast repeat on Astro (if any/if you can). I made sure I was in front of the TV last night at 8pm, and boy oh boy did I have a lot of fun watching Garuda playing the Harimaus !! While I may not be a football die-hard, (except for *ehem* World Cup) I still do follow the national football team’s progress. From time to time that is. So Malaysia won 1-0. Good thing they did. Both Malaysia and Indonesia will advance to the semis (right), where Malaysia will be playing against Myanmar. Wishing the team ALL THE BEST. Malaysia Bisa? The points tally aside, it was indeed a psychological game (slash war) that the whole team had to endure for at least 90mins last night. The ultimate was tested when Ong Kim Swee, the Malaysian coach was asked to leave the technical area and stay in the stands for the last 25minutes of the 2nd half. Still the boys pulled through despite the stronger attacks from Indonesia, and poorer defence and passing by the Malaysian boys.

But even way before the match started, if you watched the game 2 nights ago, of how defeaning it was in the Gelora Bung Karno (the stadium is named after Indonesia’s first President, Sukarno) when ‘Negaraku’ was played. The audience just couldn’t hold it but blast out their trumpets, shouting and making noise as to show how much they support their national team and not Malaysia.. Fine.. but to the point that we ourselves on the other end of the screen can’t even make out the tune and words of ‘Negaraku’ (due to the noise) is unbelievable. I had to press my ear hard and watched the lips of the footballers singing to actually see and hear ‘Negaraku’ being played and sung in Senayang, Central Jakarta 2 nights ago. The Indonesian spectators who made those noise were either accommodating very well the show of ‘no-respect’ for another nation, or simply couldn’t care less. I wonder what it is like for the Indonesian spectators were to feel if they were put in our shoes to witness such a disgraceful act from another nation to their own.. It is hurtful. It is not right. And us Malaysians should not condone to this.. at all !!

And hey, we’re into the finals !!! Ahmad Fakri Saarani scored a goal on the 85th minute. So, 1-0 against Myanmar after our boys did it again, this time with coach Ong Kim Swee in the stand for the whole match.*coach kena gantung match…* Nevertheless, may the force be with our boys for their following match – FINALS !!!! against Vietnam or Indonesia next Monday, 8pm, local time. wokeeyy?! 🙂

Malaysia has rose to a respectable 4th placing for overall ranking with a respectable 47 gold medals,  after being placed behind our neighbour Singapore in 5th placing for the past few days. Thank you to the incoming gold medals !!! And I just got to know that we have added up to the tally 2 more gold medals from both Fatehah Mustapa (500m individual time trial) and Harrif (10km scratch race. also a track event). Tahniah to both of you !! and Thank you for ending the gold medal draught for Malaysia cycling. FYI, Ng Yong Li was placed 4th in the 180km road race. Congrats to him as well ! For the BMX scene, Aim Fauzi manage to finish 5th in Malaysia’s 1st appearance in SEA Games 2011 BMX Superscross in Ancol. Rizal Tisin who competed in the same event was DSQed. We were not far behind for the mountain bike event when Masziyaton Mohd Radzi clinched a silver behind Vietnam’s Dhin Thi Nhu Qyunh. Congratulations to you dear !

Well I was working today.. but manage to squeeze in a 30mins workout in the morning before heading for work. Was actually on the treadmill on the ‘Fat Burn’ program. Interesting and satisfying 🙂 In fact I have managed to workout for 3 times this week.. low intensity, aerobic exercises. 30mins max. Did not dare to push it any further as I am still recovering from a viral fever. Still dizzy most times. Anyways, I am praying hard to get 100% better soon. To all of you doing Penang Bridge Marathon, All The Best again 🙂  !