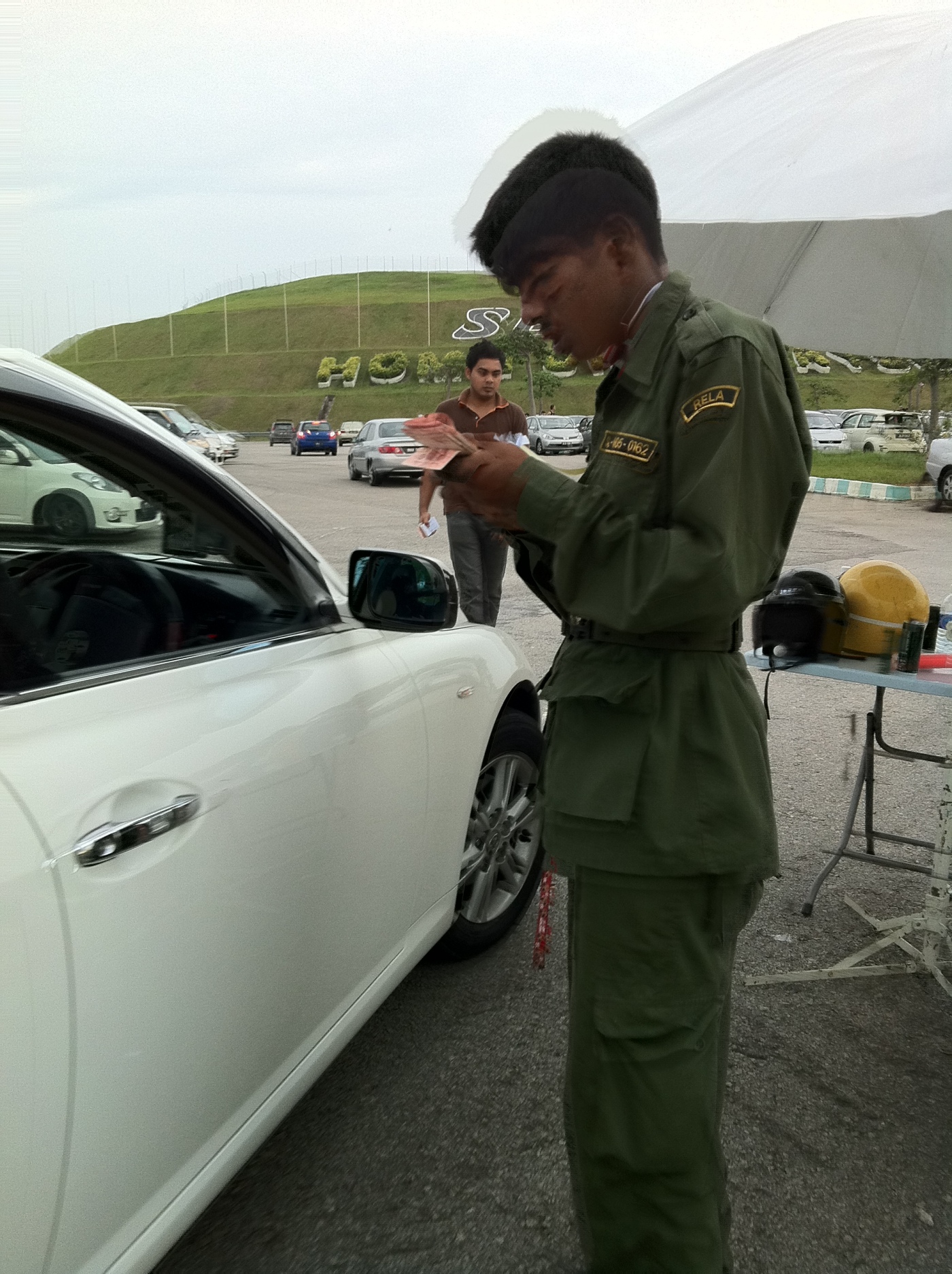 The race The plan was just to cover some mileage for my training.  I was suppose to run a 21km and another extra 10 for that reason. Partnered up with Azman, both a strong runner and cyclist.  The run was suppose to be easy and no pushing the pace. But it was NOT easy to find Azman (and likewise for him) at Sepang International Circuit before the start. I had never seen any start line sooo packed  and..squishy.. We FINALLY got to meet after race start around 200m from the start line. If any of you near the 21km start saw a lady runner yackity yakking on the phone on your right hand side near the barrier between the paddock and track while the rest of you were all vigorously setting the pace, that could be me. LOL. Anyways, the target heart rate zone was moderate (Zone 3), 70-79% of my maximum heart rate. So that’s why we planned to run slow.

First 10k The 1st loop for the 21k runner — outside the Sepang Circuit. So we ran — amazingly — in the dark despite some (and not many) of us running with the headlights on. I felt like a zombie running away in the dark. It hurts the eyes too that I was giving extra pressure to sight better in such a poorly lit running condition. Forget the headlights, some runners turned the lights facing backwards –SILAU @ Glary ! So, double the pressure for the eyeballs. Anyways, other than that the 1st loop of 10k was just fine for me — some parts of the road were pretty rough with spilled cements (which have dried up obviously) and loose rough (some big enough to trip you) stones. There were a couple of hills — but not a biggy. Azman and I were happy enough to run. We passed Onn Mohd Yusof, a strong 60 year old (plus plus) who is also an avid runner. Met him last year at Penang Bridge Marathon. At Bareno Half Marathon (just recently) Ijam and I only overtook him after 12km of running. Fadil who heard me talking on the phone at the side of the track joined me and Azman but faded to the back to join the other runners who were having a good time talking about their next day plans to ride etc. It wasn’t long before we hit the junction towards SIC.

Second 11k I have cycled the SIC track a couple months back when I participated in my 1st MTB event (boy was it pain in the coccyx !). So running on the sticky track wasn’t exactly alien to me. In fact Azman also took part in the same event but in the road category. But this time we ran the opposite direction. No problem. I did not realize (until the run that night) the track’s elevation was quite prominent. By that I mean those runners who don’t normally run hills would just settle in for a brief walk up. And Malaysians being Malaysians, I saw quite a number of us runners running on the greens, short cutting by I don’t know how many meters. I don’t think it was fair to the rest of us who braven the hills and track. The 5.5k loop felt long enough. And there was only 1 water station per loop. We were just lucky that the weather that night was beautiful with the clear black sky and shiny moon in case we got bored during the run. It was weird enough to be listening to a movie sound track while running. Found out from another runner’s blog that it was Transformer ! As I passed the start line heading for my 2nd loop of the 5.5km I saw my dear friend Shihming cheering fellow runner 🙂 All out ! Thank you Shihming !!! So nice of you.

Into the 2nd loop my running partner complained knee pain. So we intermittently ran on the grass at the periphery of the track. The last 2km appeared to be tougher for Azman he asked me to proceed without him. I passed Fairul who was on his way to his personal best for half marathon (but not quite sure now after finding out the course was under distance). I was surprised to see Fadil overtaking me when I slowed down to wait for Azman earlier on. But…mana boleh kasi chance..the legs felt sooo good after holding back the pace..LOL..apa lagi, i think i did 5mins pace the last 2km. Not in the plan. Just behaving like a kid set free from her parents after waiting eagerly for so long to join her friends to play, and run !!! As I have said before on this very page, it is harder to hold back and slow down than blasting that pace. Just take a look our lives.. Intensity is taken for granted for. Anyways, I crossed the finish line at 2:15. Not bad. It could have been slower than that if I religiously followed my intended heart rate target zone. My training to really pace and slow down continues. Thank you Azman for pacing with me and reminding me that my heart rate monitor is going wild !! (and that we gotta slow down)

I will be uploading 1 or 2 videos taken from the race night LATER, here in this post. Gotta siap to go to work lah.. 🙂  Have a beautiful Monday everyone !!! 🙂 and yeah, i don’t want to comment further about what MOST of the runners faced in Sepang just 2 nights ago. Just a quick word to the organizer, you give running (and all running lovers/organizers/sponsors) a bad name. I am utterly disappointed. The only fun part was running without any injury, with friends, and to meet more running buddies after the race. (i will comment more in my later posts). Just don’t want to spoil the fun of sharing the good stuff during ENR.

A few shout outs: To Najwa, congratulations  for finishing your first half marathon sub 3 hours !!!  You’re da bomb !! To Fairul and Azmar who got their PBs for 1/2 and full marathon respectively (but again, it was under distance). Nevertheless, Azmar hit a sub 3! So happy for you dude !! Yim, Jas, Alaudin , Jason Thiang and the rest that I bumped into at ENR, nice to see you! Guys at Powerbar booth, thanks for the drink..! Azman, two thumbs up for pacing with me throughout the run. I hope your ITB is better now. Fadil Shukor, congrats !! you did great 🙂 if training, confirm lagi laju dari saya yang tak berapa nak laju ni. Alexandria, nice to meet you again! Ijam, nice to see you with your stars !! 🙂 and whoever in that wild orange wig, awesome !!!! And finally, Hello! back at the runner who shouted ‘missjewelz’ in the pitch darkness while we were running , whoever you are ! p.s. i have not updated my Kenyir Lake report. !!!!!