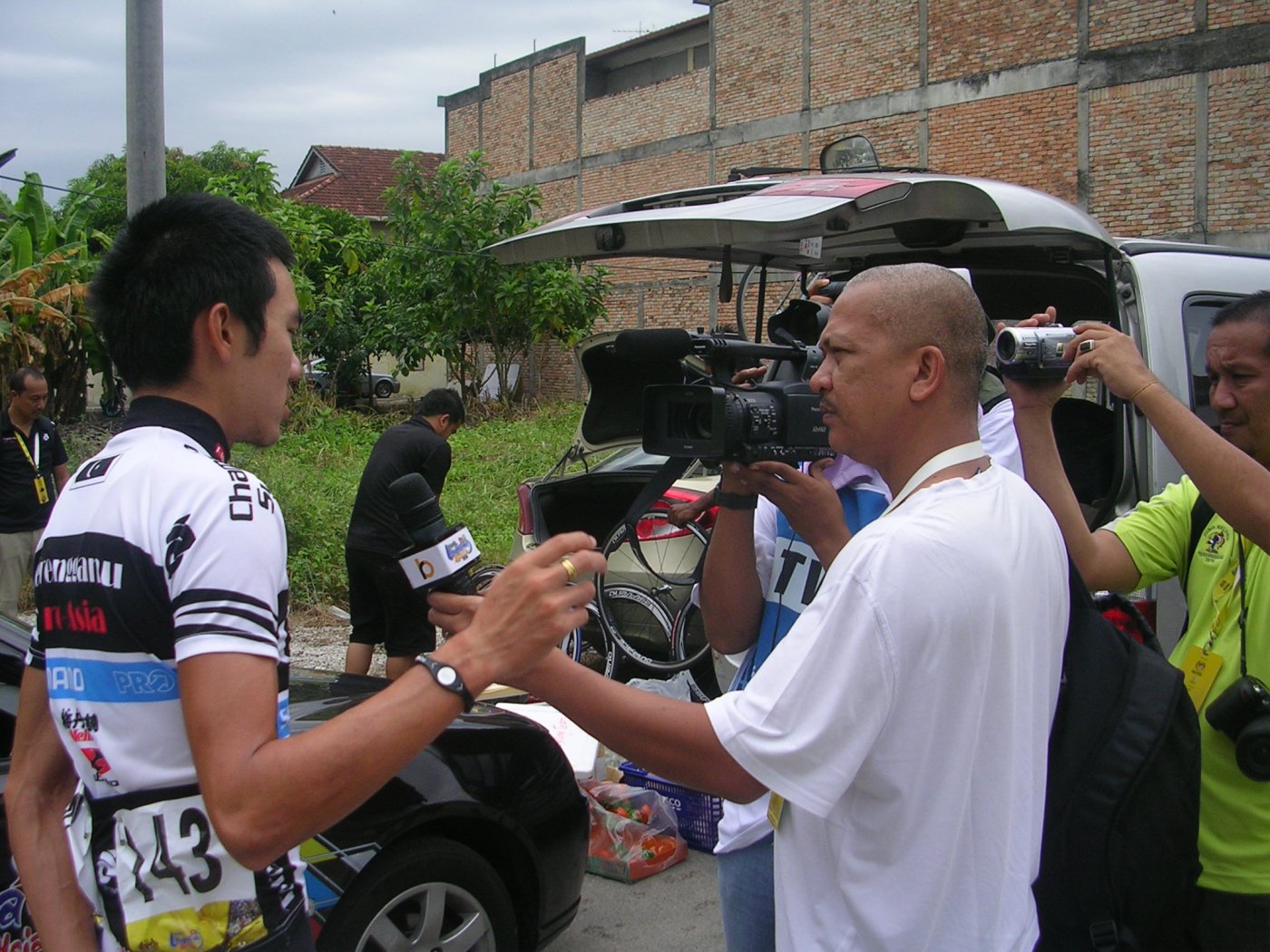 Stage 4 of TDL started in Ayer Tawar to Cameron Highlands with 3 intermediate sprints and 3 KOM along the way. Today riders will climb around 2000 meters with heavy rain reported at Cameron Highlands through out the day. Today the sprinters suppose to take a “rest” and let the climbers to show off their legs in the real mountains finally.

Almost immediately from the start, attacks started. With 3 intermediate sprints and 15 points up to grab, Harrif was very active attacking from the start but each time yellow jersey sent his teammate to chase Harrif down including Gardini himself but Anuar was on his tail watching his every move. With big mountains still to come, both decided to save their legs for later punishing climb. Shinichi Fukushima still heavily covered in badage from yesterday’s 3 crashes launched the 1st decisive attack, about 15 riders joined Shinichi. The bounch maitained a good gap but team Colongo CSF was determined set up their climber for the stage victory by setting a blistering pace. There were more attacks and counter attacks followed, a small group of 3 rider finally got away at the bottom of the climb. They build up 2 minute gap, but the gap started reducing with every meter of climb.

Before crossing the 1st KOM climb, Shinichi was in trouble, hurting from the injuries and earlier attacks, he was 1st to drop from the peloton. With more than 60km of climbs ahead, an ordinary rider would most likely give up after the heroic effort; however Shinichi is certainly no ordinary rider, not only he finished the day well within the time cut, he caught many riders along the way and finished with the “sprinter” group. While the front peleton is getting smaller as attacks kept coming. Half way up the summit of 2nd KOM, the yellow jersey finally poped and entire peleton broke into several pieces all over the mountain road. Before the summit of the 2nd KOM, 1st group was down to about 40+ riders, Terengganu Pro-Asia’s Phuchong, Mat Amin and Saufi all in the 1st group of riders before going into the day’s last steep 10km climb. Meanwhile, the rain was pouring and temperature was dropping with every meter of vertical meter gained, the cold condition did not work in Phuchong and Saufi’s favor as both were not eating enough through out the day to stay energized, but both limited their lost to just 3 minutes. Mat Amin showed he got the best legs to hang with the race’s best 30 climbers, he was suffering like everyone but his toughness and heart fought on in the miserable condition, lost only one and half minute to the winner of the day and new yellow jersey leader AyableTakeaki of Asian Racing Team. Anuar was climbing surprisingly well and well ahead of other sprinters and “climbers”, he finished the day less than 9 minutes down from Ayable.

Tomorrow Genting highland climb will be shorter but much more steeper and hope even more exciting.

For more action photos from Cycling Asia Photographic, click on image below.

It didn’t end with the multiple crash suffered involving  the LeTua team in stage 3 where Samuel Witmitz (L2A) got into 3 crashes while Razif Salleh and Adrian Chuah was also caught in a massive pile up at the last kilometer before the finish — Sinichi Fukushima and Harrif Salleh both from Terengganu Pro Asia Cycling team was not excluded, they too were involved in a couple of pile-ups. Sinichi crashed 3 times, and Harrif 2. An award for most crashes in a tour ,anyone?

The stage 4 yesterday was both a good and bad outing for the LeTua cycling team . Libardo scored big clinching the second spot for the tough stage 4.  His team mate, Vidal Celis Zabala who also suffered a tyre puncture wasn’t as lucky as he was disqualified (DQ) from the tour after being caught by the commisar holding on to LeTua support car (team B). The insight scoop that missjewelz.wordpress received was that Vidal was in the midst of fixing his seat post when the commissar saw him. Both Vidal and the support car (Team B) is fined 200 Franc each. If an official complain is filed, another 300 Franc. LeTua cycling team is left with one support car in which their coach Joe Nayan is in and one rider less. Support crew Shaiful @ Janggut is also not allowed to follow the rest of the tour as he was in the second support car. I hope their complain (if they did complain) would be heard and considered by the commissar or else LeTua will have a tough time looking after their riders in the 124.3km stage from Tapah to Genting Highlands. The route today (Stage 5)  is (quoted to be) less challenging compared to yesterday. Either way all the best to all riders today !