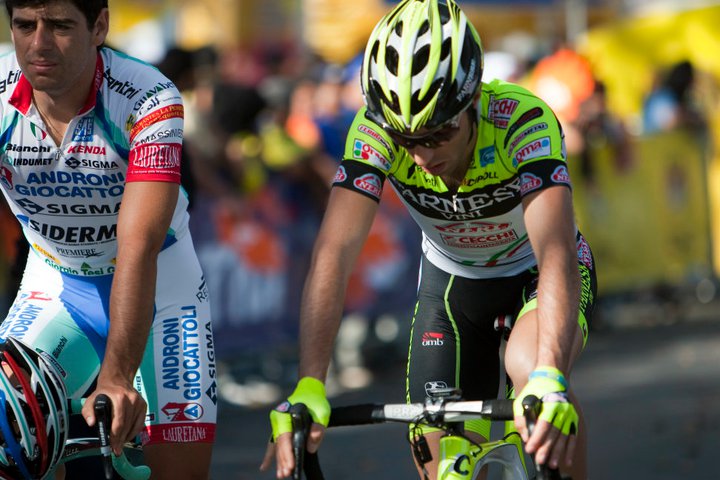 Announcement : missjewelz.wordpress.com will at best and daily basis bring you updates for LTDL, with special attention to the newly formed Terengganu ProAsia Cycling Team which is smashin’ it at Le Tour de Langkawi 2011. Show your support to this team. Their FB link here.  Thank you for dropping by !

LTDL News courtesy of the organizer :

GUARDINI WINS INTO BUTTERWORTH TO REINFORCE HIS GRIP ON YELLOW JERSEY

BUTTERWORTH – If yesterday was revelation, today was confirmation. After pulling off a very rare coup in winning his first professional race ever, Italian rider Andrea Guardini showed that victory was well deserved when he took another impressive sprint victory in Le Tour de Langkawi.

The 21 year old avoided the crashes which littered the final run-in to the line, staying upright, remaining in the right position and then finishing it off perfectly to triumph in Butterworth. Guardini, who competes with the Farnese Vini – Neri Sotttoli team, beat Boris Shpilevsky (Tabriz Petrochemical Team), Malaysian rider Anuar Manan (Terengganu ProAsia Cycling) and the rest of the peloton, fortifying his grip on the yellow jersey of race leader.

“I am very happy,” he smiled at the finish, wearing a new yellow jersey presented to him after the stage. “Today’s win shows that yesterday’s win was not a fluke. I’d like to say a big thank you to my team because they rode at the front from the first to the last kilometres. [Elia] Favilli dropped me off with 300 metres to go and I finished the job.”

His performances in the past two days will have given his morale a major boost. All new professionals wonder if they will cope well with the jump in standard; right at the start of his first season, Guardini has given himself the answer.

The sprint itself was straightforward, but he said the lead up to it required a lot of work. “It was more difficult to win today than yesterday, because the finishing line was five kilometres long,” he explained. “Many teams were still fresh and the finish line was easier to get to [for his rivals]. There were many crashes in the last kilometre, it was hard to avoid them.”

One of those who went down hard was the Japanese rider Yukiya Arashiro (Team Europcar). He suffered cuts to the left side of his face and also chipped some teeth. Fortunately he has no broken bones or other injuries, and will be able to race tomorrow.

Third-placed finisher Anuar Manan referred to the crashes in his post-race interview, saying that avoiding them was key to him placing highly at the finish. He won the points jersey in last year’s race, and has set that out as a major goal of his.

“For today, my target was to try to get the points jersey,” he said at the finish. “Getting the best Asian rider jersey is a bonus for me today. I collected points at the first and second intermediate sprints, but some breakaway riders were away and so I lost some possible points for the green jersey today.”

He pledged to continue to gather points tomorrow and also to try to get closer to the yellow jersey.

The breakaway riders Manan referred to were the Australian Deon Locke (Team Champion System) and the Iranian Hamid Shirisisan (Suren Cycling Team), who got clear eleven kilometres into the stage. The gap increased to a maximum of six minutes five seconds at kilometre 44, then started to drop afterwards. Locke took the first intermediate sprint at Jitra (km 32.4), and was also first to the next Guar Cempedak (km 83.2).

The duo stopped working for a while afterwards but they eventually persisted, continuing until Shirisan took the day’s final intermediate sprint at Sungai Petani (km 111.4). They were finally caught with 25 kilometres to go and while many other riders tried to go clear, the sprinters’ teams were too strong and set things up for a big bunch gallop.

There, Guardini showed his speed yet again, taking what looked to be a straightforward victory and reinforcing his grip on the yellow jersey. He was asked after the stage if he felt that more wins were in store, given that in previous years sprinters who have triumphed early on have dominated the sprints throughout the event.

“It is always difficult to win,” he answered. “Today I had to confirm yesterday’s win. It is very good to have made it two out of two, though, and tomorrow I will try to win again.” He holds the green jersey as best sprinter, while Manan is top-ranked Asian rider and wears white as a result.

As for yesterday’s holder of the red jersey, the ongoing King of the Mountains leader Koen de Kort had a quiet day today as there were no points on offer. He simply had to finish the stage to keep the red jersey, and duly did so.

De Kort said that most felt a big gallop was on the cards, and that is why there weren’t many breakaway attempts. “I think after yesterday, everybody knew that there was a fairly good chance that there was going to be a bunch sprint,” he explained. “I think not a lot of guys wanted to be in a breakaway so as soon as two guys went up the road, the whole peloton was happy to let the Italians [Guardini’s team-mates] do the job for us and bring us to the finish line.”

“It is still a long race and there are many hard days to come.”

Stages four and five scale the climbs of Cameron Highlands and Genting Highlands, and are guaranteed to upend the general classification. Tomorrow’s 144.9 kilometre race from Taiping to Sitiawan is a more straightforward day in the saddle It contains a KOM climb near the start (km 173) and then intermediate sprints at Kuala Kangar (km 32.7), Beruas (km 77) and Pantai Remis (km 100.6).

Le Tour de Langkawi 2011 is organized by the Youth and Sports Ministry of Malaysia together with the Malaysian National Cycling Federation. The 2011 Tour is held from 23rd January to 1st February covers a total distance of 1315.4 kms with 10 stages, starting in Langkawi Island and ending at Dataran Merdeka, Kuala Lumpur.