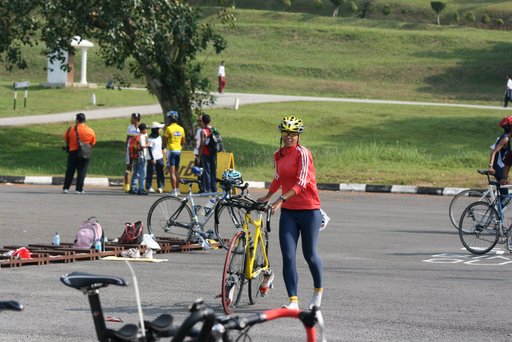 So the first installment for MUDS this year took place in UPNM, the host for the final series 2 years ago. MUDS or MALAKOFF University Duathlon Series is a 3 week back to back sprint duathlon (run-bike-run) event held at 3 different universities. For 2008 Universiti Kebangsaan Malaysia (UKM), Universiti Malaya(UM) and UPNM played host. In 2009, the honour was given to Universiti Putra Malaysia (UPM), Universiti Tenaga Nasional (UNITEN) and UM. As for this year, UPNM graciously played role as the 1st host, followed by UM for the second series, and the final one will be in UPM this weekend.

Course profile : mostly flat on the run course with a short hill on the start of each run loop. Bike course? Who does not know the infamous Bukit Cinta in Malaysia’s oldest uni ?! yeah, 2 loops of that totalling up to 4 major climbs. The flats only connect the descends and the next climb. For hill lovers (as in cyclists), here’s the place to be !

Course profile : a flat run course, not too scenic i think. luckily it would be only 3km, (times 2). Bike course , generally a highway kinda flat with some gradual climb but very mild, a nice course to switch to the big cranks and go on the bars. Speedsters would love this course. If you will be on your MTBs, well, not as fun as Bukit Cinta, but you’ll surely wish you were on a roadie !

BUSY would be one word to describe the days leading to the first series. Tied up handling the X Team in preparation for this year’s MUDS edition. The last time I took part in a race in UPNM was also MUDS. That was 2 years ago, during the final series. I was invited by Powerbar as a presented for the Duathlon Clinic on Friday, day before the event. I was there twice on Friday. First to send 2 bikes (doing a favour for the X Team), and secondly for the clinic where I also brought along my Yellow Submarine. I havent road it since I don’t remember when, especially after my friend Najwa used it during a training ride. Long story short, I didn’t refit the bike after she used it..

DUATHLON CLINIC went by successfully with more than 150 people in the hall when I was talking on the stage. 130 – UPNM cadets, and 20 ++ at the registration area at the back. I got a call from Powerbar on the 11th hour telling me that they need me as a replacement for another speaker who cancelled.  The same case last year as well, when I presented in UPM. So, last minute presentation (I don’t believe in using other people’s slide/content for my presentation), NO rehearsal, NO notes (well i printed but forgot to bring to UPNM lah!). The fun part this year was I brought more items to exhibit on the stage including some apparels and of course, Powerbar products.

Thank you Chan Jun Shen and team for helping out with the clinic 🙂 Much appreciated. Last year when I presented in UPNM he helped me out too, so thanks !

RACE DAY started early. Had to wake up at 5am even though race only starts at 9am. 3km bike, 13.8km bike and another round of 3km run. Sounds like a pretty short distance, doable. Yes, you can Du! But if you’re going with a competitive mode, than it’ll be very tough, especially for the Men Uni category. Strong contenders in this one. My intention for this year’s series was just to continue supporting the event, and promote it to more friends and also the university students. Multisports is only famous among the multisports regular but obviously not in higher institutions, and that’s the whole objective of MUDS, to expose multisports to the IPTAs.

Run start – was busy talking and catching up with friends and the regulars. Always nice to see the familiar faces. Dayan, Major Kalam’s son was also there to take part. He was THE highlight of MUDS last year when Shelby Singh wrote an article in one of the leading newspaper about MUDS AND Dayan, and why footballers should also look into this sports and appreciate the effort and determination shown by Dayan. Dayan quoted before ‘I don’t quit’, and he did just that. 🙂

Run 1 – Took it easy, no pushing, like at all. Was at the back pack most of the time. Started to inch slowly to the front after 2nd run, but not much difference as everyone was moving fast ! The road leading to the swimming pool junction was a bit dusty due to on going upgrading construction.

Bike – The bike course was nice though there were a few junctions we had to cross including 1 U turn at this round about on a hill. The climbs were gentle enough but because of an enveloping ITB discomfort, I didn’t push. Plus I still gotta save my legs for the Port Dickson International Triathlon the following day ! I am sure I heard the race director announcing that this is a non-drafting race. So I just had to remind a lady participant ‘No drafting allowed !’ Only to my surprise, a whole bunch of participants were drafting. A wee bit confusing there..’.  So, maybe I heard the briefing ‘wrongly’.

I used the big crank most of the way but dare not push or pedal harder as I already started to feel some discomfort on the right knee and ITB. I still have an OD Tri race the following day (which I’ve been preparing for),so no point of pushing for this sprint duathlon. I was, well, worried with this condition as it will surely affect my performance in PD. I didn’t want to make the condition worse.

Run 2 – Only started to push a little starting on the 2nd run and over took a few more people. On the bike I lost count how many I overtook. By this time, it was already HOT and I just wanted to finish the race, and go back to PD.

Crossed the finish line 3 minutes after the leader of my category, from UPNM ! Congratulations to UPNM ! First place for the guys also went to UPNM, Chan Jun Shen. I simply love the atmosphere of everybody supporting and cheering for the athletes. And of course, to see the regular faces in multisports/running scene turning up to support the event. Congrats Lynn Guan ! Powerbar wavered my fee just like last year, so THANK YOU Powerbar for the honour ! But I totally forgot to ‘display’ the sponsor my apparel last 2 weeks during the Series 1. But i did, last week ! Hihih.Got a nice goodie bag from Powerbar, a bright YELLOW one, with Powerbar goodies inside.

Race organization : two thumbs up to Quick Release Adventures , and the sponsors  !  🙂

Turn out : Only UPNM and IIUM was visible .. UPNM as the host, and IIUM as the 2nd largest contingent I would like to believe 🙂 UM was not visible at all inspite of playing host for the 2nd series.. uhm, maybe they are so busy preparing ?! LOL

Day ended with a sore ITB, especially at its insertion near my knee. ouch..!