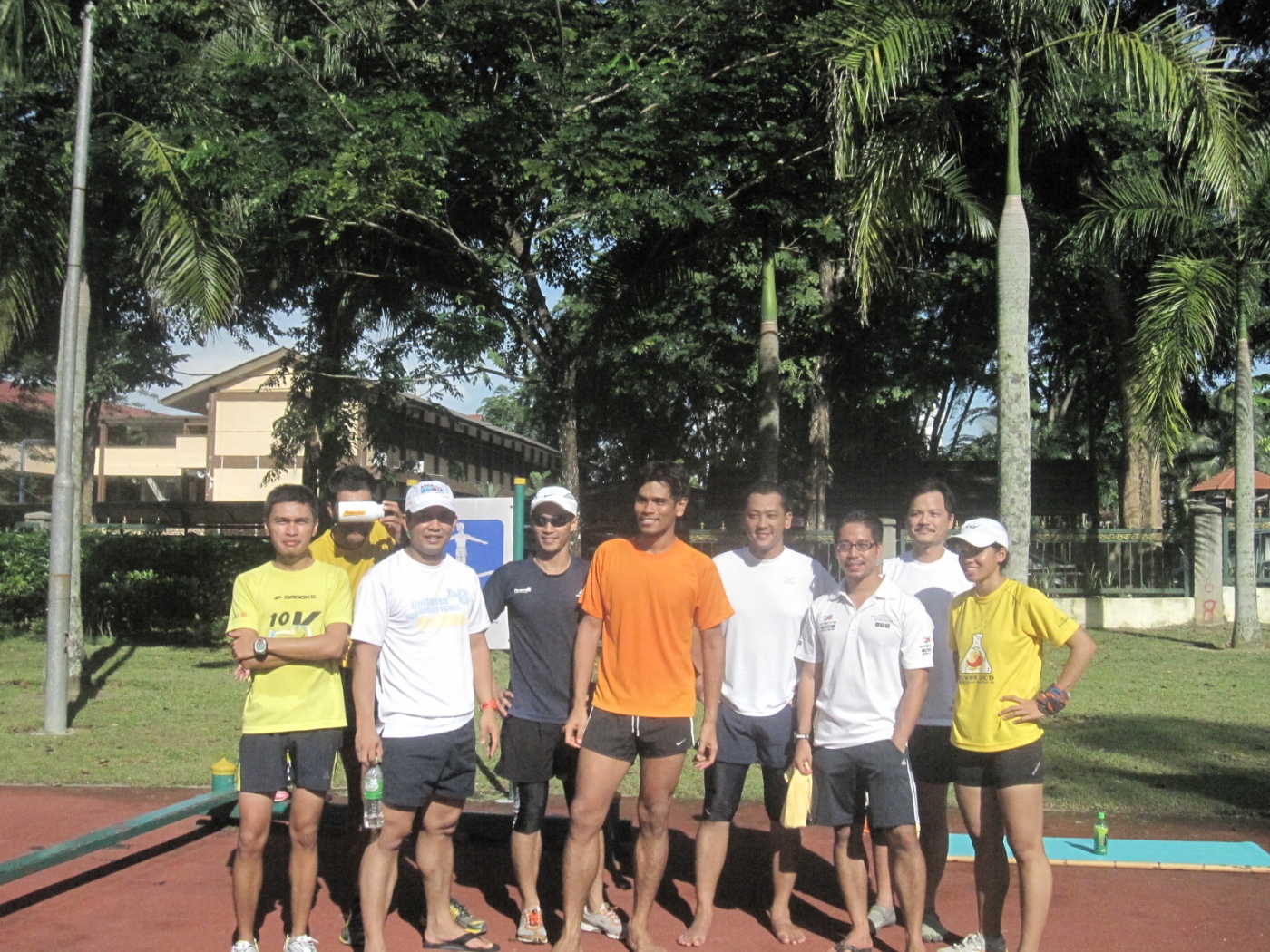 Salam. Its 00:59am. Listening to Chris Cornell’s version of MJ’s Billie Jean. Just the perfect tune to listen in these early hours of…21st June 2010. I am officially post 20th June 2010. 🙂 Before I proceed.. just click play on the video below. If you’re a Michael Jackson or an  Audioslave fan, I bet you will enjoy this cover version.

I have lots plans, yet to be executed. Will take it one at a time. No rush to anything. I have passed the incredible date..which happened to fall on Father’s Day. Makes it more memorable for me. Watched Paraguay vs Slovakia with dad and my brother. Manage to talk to my dad of my future plans. LOL. If anyone could wish for a more atypical daughter, I’ll just vote myself in. Atypical music genre..(who’s 28 in Malaysia + listens to The Platters?).. Atypical food appetite..I eat almost everything except for..durian, petai + sambal belacan. Atypical (well not so atypical now) leisure activities of choice.. I choose conducting stretch sessions instead of shopping.. Ironman instead of partying and clubbing.  They’re all relatively ‘atypical’. But on my own, I think I am doing ok. Happy. I think. And now missjewelz will be moving on.. I hope it wouldn’t be too awkward for me. To take in things and time AND reality.

I did thank a few close friends who supported me these few years, and some the past few years of my life.. I have to say that I am pretty much focusing and cherishing the things that I do at the various current points of my life, and move from 1 point to another smoothly, alhamdulillah. The fact that I am still able to stand after having  gone through some rough patches over the 28 years.. I was thrown in the swimming pool by my uncle when I was 3 ! hahaaha..and got ‘lost’ when my mum was shopping ..and a stranger actually brought me back to her..hmm..happened when i was around 4-5 I think..during 1 of the summer trips to the UK.. well,I am just dusting off the tip of the iceberg here. I’ve been through a lot and nothing has taught me more than my own experiences, as well as the invaluable lessons and advices the parentals have given to me. I used to joke with my friends that I felt my childhood was like growing up in an army camp ! Nothing compared to the 1 month Wataniah recruit though! hihih.. anyways, did I tell you I am a Private ! yeap… Askar Wataniah 515..Kem Jln Ampang.. now no more in Jalan Ampang, already moved to Jln Semarak near MINDEF. The old camp was much nicer.. though it got ‘out of place’ with all the development around it.But no big deal though.. not really active anymore ! 🙂 had my share of the beret tan lines on my forehead, the ugly blister on my kaki (damn keras boots).. and the nose bleeds and pitam moments marching or standing in line in the hot sun.

My dad once told me , Focus on your pursuit for academic excellence.  Well, he’s gotta re-edit the line now and tell me something else! It was Father’s Day yesterday, my siblings and I gave him a simple card. nothing extra special, his existence and our (me and my siblings) are enough to make things wonderful. Usually I would make my own card, and home videos..same thing during Mother’s Day, and my siblings’ birthday. They gotta be original ya know what I mean. So that was where the ideas of toying around with the Movie Maker started. If you have not taken a look at the videos which I’ve made (not that they’re so fancy or anything), you can drop by at my YouTube channel youtube.com/missjewelz. I did a few videos as tribute for the late Ngae Koh Hieng.. and kinda like the latest vid..very catchy tune by Gary Glitter. I didn’t know anything about Gary Glitter until I discovered the song I used in the video.
I will be 28 in August. Funny.. when I was in my teens, I remember telling myself… ‘i can’t imagine what its gonna be like when I turn 20..!’…and now I am in my late 20s… (don’t you like it when history repeats itself).. ‘hmm.. what will it be like when I turn 30..’ What will I be…where.. uhmm..et cetera ..et cetera.. ada la a few questions more which I ask myself.. Imagine yourself being strapped on an escalator… no matter what you do, you will keep on moving. Time, in my case, (or rather our case).. waits for no one.. So make time.. find time… and don’t give excuses in saying that you can’t achieve what you wanna achieve because of time. Time is constant..(right?).. So the only other variable is..you ! And of course the other determinants of our life experiences, the people around us, probabilities, causes. I am in one of the transition periods of my life where I gotta be clear of where I am heading to. I don’t want to rush out of this transition as much as I don’t want to stay in it for too long. I won’t take life as a race..I will take it as a journey to a few destinations.. If there can be only 1 goal in life, or 1 target/cut off time.. won’t life be boring..? I guess it would be dull, at least for myself. So there, 1 thing at a time.. and of course I do have various goals that I will work to achieve, insyaAllah.
It’s 1.40am.. I was listening to Audioslaves’ ‘Be Yourself’.. layan..takpe, lead singer handsome, suara macho, sexy tunes and beautiful lyrics… hahahah.. my kaki also moving with the beat of the song. My first time listening to it !! hihi..here, if you haven’t !
It is 1.43am.. i think i better stop before I write an open letter to my own blog. hahaah.. i miss the way i ranted and ramble on my blog when I started blogging..2003, 2004..there about. okay..i think i gotta retire now…early day tomorrow. Have a happy productive week you all ! And don’t forget to appreciate every day that you’re able to wake up and live another day. 🙂 be gracious and kind to those who are dear to you, and even those you tak kenal (meaning those who you don’t know).. (a reminder to myself) and don’t take for granted when somebody is kind to you. be kind(er) back to them ! have a beautiful week you all… mmuahhh ! -missjewelz-

Me and my Kuantan Pacesetters friends ! Fr left: Ms Soh, Sharon, William, myself and Jimmy. 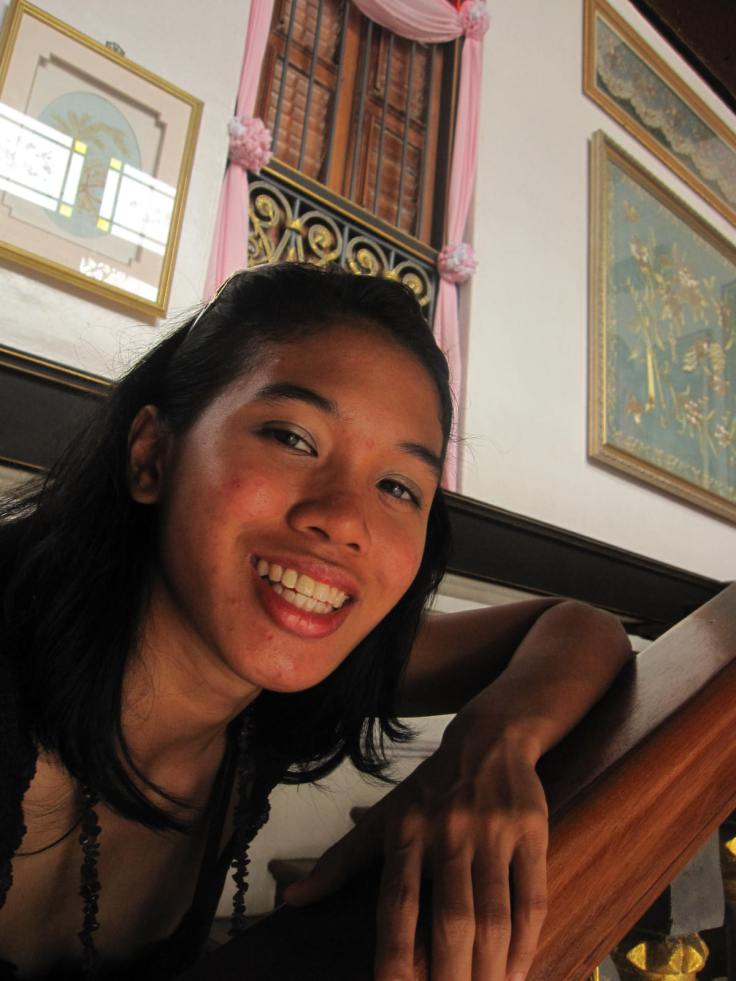 At the Baba Nyonya mansion in Penang 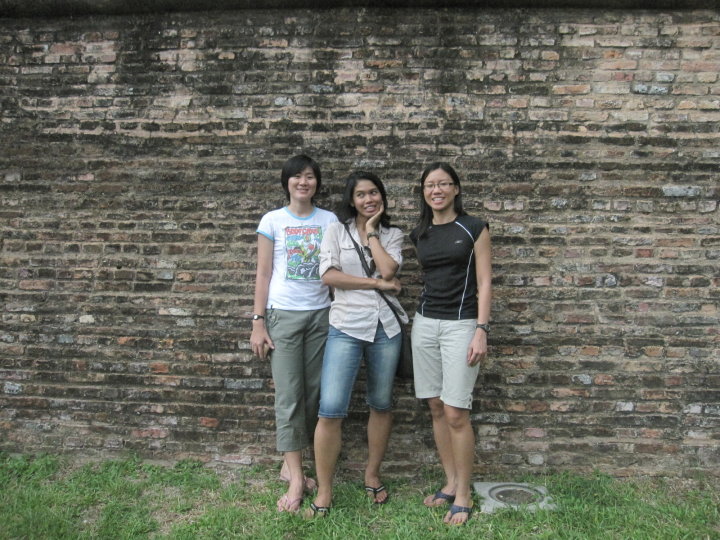 Me and my lovely Penangites hosts; Lie Wei & Chin Chin.