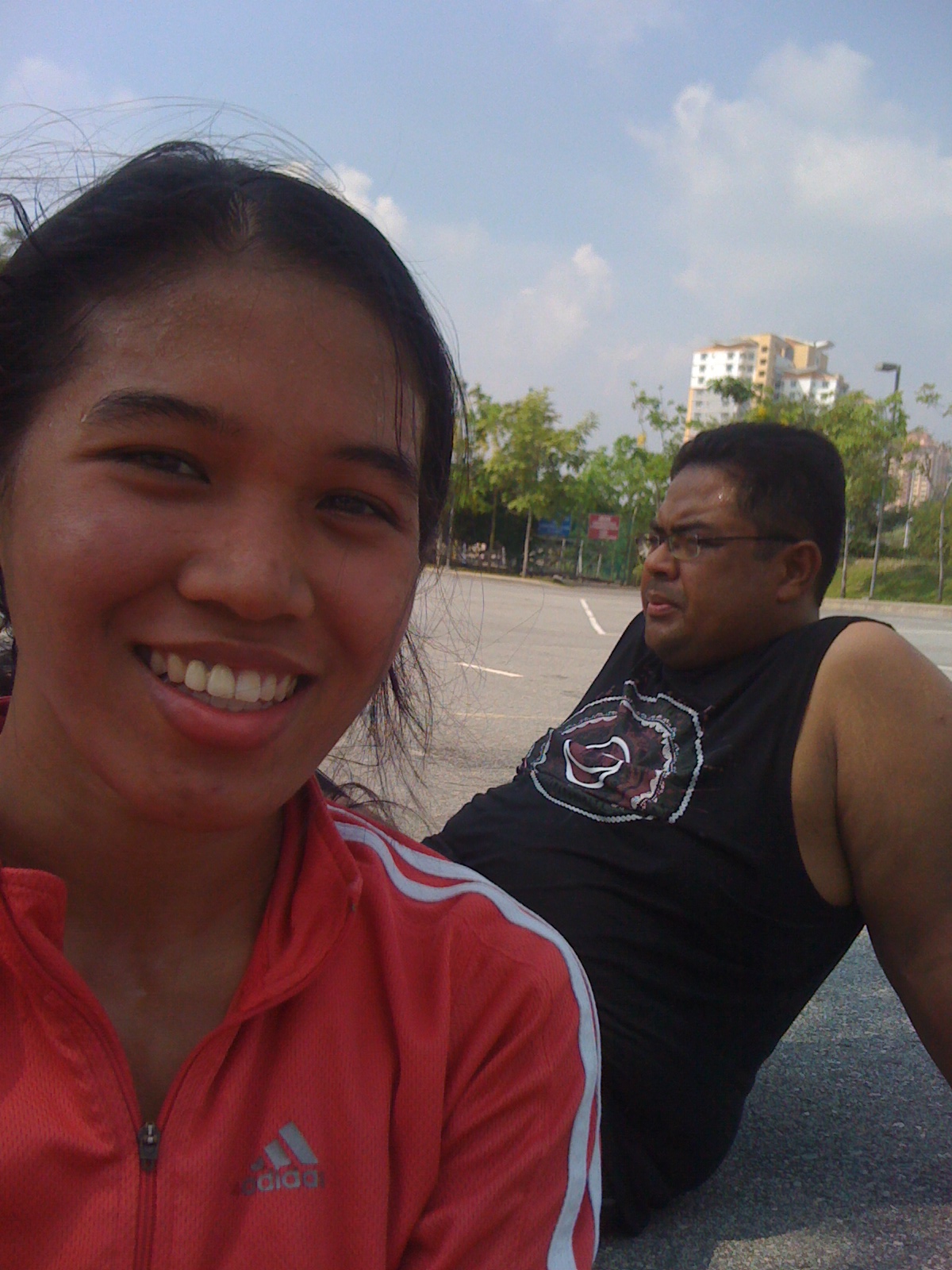 I was helping a friend, Karyan who was the organizer for the Fitness Concept Road Show at 1Utama today. Initially she wanted someone to ‘help out’ for event. And last minute she said she don’t need one as the vacancy has already been filled. So I thought no need for me to go as I needed to concentrate on my studies. Anyways, she texted me PLEASE come as she still need participants for the challenge. Okay… So, rushed to the venue and we started the ‘tri’ challenge.Me and 2 other guys. 10mins run, 10 mins on the cross trainer or wuteva its called and 10 mins on the bike. and 1-2 mins break between each challenge. During the crosstrainer segment, the announcer asked me if I do any sports and if I know anything of triathlon. So I explained that there are 3 popular triathlon distances , sprint, olympic/standard distance and Ironman (i forgot to mention 1/2 Ironman). Anyways,it was during the bike segment when another announcer came and said (on the microphone), ‘you have done an Ironman, this is nothing for you. Cycle faster/Pick up the pace’.. The announcer who happened to be a PT should know better than judging a book by its cover. You can’t straight away relate/correlate anyone’s experience doing Ironman with a half an hour speed challenge (the challenge is to accumulate most distance through the 3 segments).

He does not know when I did Ironman. He does not know what’s my current fitness level. And he does not know if I have some condition or injury , to just blabber out  like that to keep the event ‘happening’. To me, he just underestimated an Ironman, or a triathlete. and he also said something along this line ‘180km on the bike, THIS should be nothing for you’. hahaha..what a ‘farney’ personal trainer. Cuba(meaning ‘try’) I letak(means ‘place’) this pt at the kuah jetty, ask him to swim a 3.8km, after that put him on an 180km bike and after that ask him to run a 42. If tak nak buat outdoor, I can do indoor ironman distance just for him.

Hello ?!! Its different la training on this kind of machines and the whole Ironman experience. You gotta take Ironman (or triathlon in general) as a whole and not separate the discipline. I found it annoying because the PT seems unfamiliar with triathlon and yet thinks he has the ‘credibility’ to say what he said. If he is a runner, he would at least appreciate ‘distance’ runners.  But he spoke as if he knows how hard it is for anybody to commit and race in this kind of distances.Ya right.

I haven’t been running for like ages and did my 1st run 3 nights ago, but on top of that I have been cycling for the past 1 month. Some strength training. And that was it. Haven’t touched the water in ages as well. For a person or ‘professional’ to say such a dry statement like that actually means he does not know what he’s talking about. Maybe he didnt mean any harm. But he doesn’t know anything about it me or tri events and yet want to give his piece of mind to me, which I don’t agree. Plus I volunteered to come for the event, and the event is for good cause (they’re donating RM5 per km covered by each participant) to a charity.Note: I have to credit the event staffs who cheered for the participants 🙂

Close to my heart

Ironman, was, is and will be my personal quest. And whoever jokes around with this word should better watch out (just kidding!). I mean, I don’t go around consciously parading my finisher t-shirt or wear the IM cap everytime I go for a run. It does not mean anything to me. I have had my glory on the race course February 28, 2009. And at the finish line of course. Kadang2 segan nak pakai the tshirt, but when the mood is good I don’t mind wearing it lah of course. What’s more important is here –>> I give my 200% percent respect to ALL the Ironman finishers, young or old, no matter what your finishing times are. Look at Patsy, Yup Sze Mun, Sofian Ismail and Ngae Ko Hieng, THESE are the people who we can and should include in our inspiration list !! You bet they ARE certainly in my list now. These people are simple versatile, humble,cool, funky , and simply inspiring. When I grow old I want to be like these people . Man… I wish I could bring all of these people here at the challenge today and tell that PT/announcer guy ; here are my Ironman friends. AND the glory of Ironman for these people does not come from speed. Its that internal will and motivation that psychs them to keep on going. Even if you finish at a painstaking 16hrs++ with a bad ass blister or bleeding foot because you hit the bottom of the bouy metal piece (Senn and Stupe), or got stung by a jelly fish, or even after cramping like crazy during the run or after nearly giving it up on the run course, you still finish and deserve that respect and glory of an Ironman finisher.

When you talk about the Malaysian tri-scene, how many percent of the people/triathletes that you talk of consists of sub 10 or sub 11 finishers? We can count these people, as they are not many. Yes they deserve the credits for achieving their amazing feats. for the race. And what about the percentage for the 15 to 16 hours finishers do you talk of of…? do you ‘differentiate’ them with the faster finishers ? or all of them are just like soo inspiring you can’t say no more. You can be a sub 13 finisher but kena kantoi drafting with a bike, and got top ranking for your age-group.woohoo..Elok la perangai.. and you can be a sub 17 finisher but finished on time, despite the agony and pain of going through the 17 hours.  Mana mau respect..?

Ironman is about the attitude

Ironman is about the attitude. Its interesting to observe how people race and train for this event. Look at their behaviour on the course. To some, its a way of life already. Just look at IM Sofian, I mean come on, this guy have been racing here and there(Busselton, China etc)  with a ‘MAS’ on his tri-suite. Not forgetting that he never fails to smile. aaaaa so comel one. Grinning like that, and crossed the finish line with his family. He’s the man ! He may not be a sub 12 finisher but he totally proves to all that his passion, commitment and consistency is so amazing its able to ‘lift’ you up so that you will see the larger dimension of life. We shouldn’t be ‘narrow’ if you know what I mean. Then we have Patsy; how old is she again..?  60 ++ right? Come on, she did XTERRA Kuantan yo !!!  An off-road triathlon.  A dip in the South China Sea, the challenging Mountainbike route and then the off road run.  Even Upiq,  (he’s also another ‘the man’) thought he might as well pace with Patsy. Remember the blind Japanese Ironman triathlete which I mentioned in my Ironman updates? How I wish I could train a blind athlete into triathlon. It would be such an inspiration to all of us Malaysians, especially to those type of PTs who ‘talk big’ and think they know what’s the difference between an indoor speed/distance challenge compared to a real extreme challenge. It is uncomparable . I may suck on the treadmill just now coz  I have not been training and damn am i going to put pressure on my knees, (know way ho zay) but I have done a sub 14 hrs Ironman and I would be more than happy to challenge that PT to beat my time and tell me later on if Ironman is the same with some indoor ‘tri’ challenge.

12 thoughts on “Underestimating the OrangBesi”