Doing my bit as a responsible athlete and friend. Got the link from another IM friend who is also skipping this year’s event. 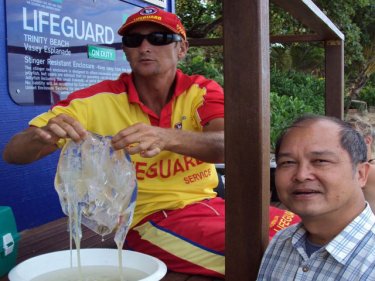 By Alan Morison Wednesday, February 3, 2010 Today’s Phuketwan Updating Report
THE DEATH of a Swedish tourist on the Malaysian island of Langkawi, apparently from a box jellyfish sting, has heightened concerns about swimmers’ safety throughout the region.

Swedish media reports have focused on the death, which is likely to alarm some visitors to Malaysia and Thailand.

Carina Lofgren, 45, died a horrible death in just five seconds, according to reports from Pantai Cenang, a beach resort on Langkawi.

The Swedish Embassy in Kuaka Lumpur confirmed today to Phuketwan the circumstances of the woman’s death.

Aftonbladet, one of Sweden’s most popular newspapers, reported that Mrs Lofgren was enjoying a farewell swim with her husband, Ronny, when the jellyfish wrapped its tentacles around her.

The couple had been taking a holiday in Thailand and Malaysia, renting an apartment on Langkawi close to the water, with Ronny’s sister and her husband.

The newspaper reported that the four went for a late-night swim, then: Carina’s voice suddenly cut like a knife through the night.

Her husband was quoted as saying: ”She screamed like a stuck pig and started pulling on my legs. Then we realised that it was a jellyfish of some sort. We tried to pull the tentacles away.

”It took four or five seconds, then she sank down, lifeless.”

They carried Carina to the beach, the newspaper reported, where. Ronny’s brother, who had worked as an ambulance medic, performed cardiopulmonary resuscitation.

”He did CPR on her, maybe for four or five minutes. Then I took over. But I knew at once that she could not be saved. She died in my arms,” Ronny told Aftonbladet.

Paramedics arrived after 15 minutes. ”One of them said, ‘Oh, jellyfish,’ and shook his head. They tried to revive her, then they shook their heads again.”

A week earlier, a German woman had been stung on the beach, the Swedish tourists were told. Yet there were no warning signs, the newspaper reported.

”They are clearly afraid of losing tourists. I would not ever swim in the ocean down there again,” the dead woman’s husband is quoted as saying.

The couple have two adult children and later in February would have marked their 26th anniversary, Aftonbladet reported.

According to Swedish marine biologist Lars Henroth, the woman was probably stung by a box jellyfish, named for their cube-shaped body. Box jellyfish have the reputation for being the most toxic creatures on earth.

The Phuket Marine Biology Centre has led the way in researching all jellyfish in the region, noting that instances of contacts with box jellyfish appear to be increasing.

A young Swedish tourist died from box jellyfish stings off Koh Lanta in Krabi in April, 2008.

Resorts and lifeguards around the Andaman region now keep vinegar handy. Vinegar is the only known treatment for jellyfish stings.

While smaller varieties of box jellyfish have been discovered at a bay on Phuket’s east coast, there have been no confirmed sightings at Phuket’s popular west coast beaches.

Experts in Australia, where the deadly ”boxie” has rapidly enlarged its territory, believe it is probably only a matter of time before sightings are made on the Andaman coast.

Jellyfish everywhere are increasing in number, possibly in response to overfishing and the retreat of natural predators, including turtles.

Several seminars on jellyfish were held on Phuket last year and another is scheduled for later this month.

2 thoughts on “to all my Ironman Langkawi bound friends”