Back to back races may be good to some, and not so good to others. I stand in the middle. On Saturday, a day before my 2nd  PD tri, i was at UKM, for the 1st leg of MUDS (MALAKOFF University Duathlon Series 2008) . I came in 2nd, 2 minutes behind Stephanie Chok, for Women University Category. After the prize giving, had to rush to PD.  Drove not so maniac this time, had to observe speed limit , plus fuel price is not cheap anymore.  Skipped lunch (not a good idea!), and once sampai PD, waslooking for Azwar to pass him barang Trikidz. Had to distribute Trikidz 3rd triathlon form even I was tired and everything..  We had no booth, so no choice but to distribute the forms manually. At the same time, was watching the sprint and Asian Cup Series which was going on that afternoon. Penat oo.. Saw Shahrol, Shazly and a few other familiar faces.

Carboloading & briefing : As usual, makan2 and briefing before race day. I guess more participant and crowd this time. Dino came down with diarrheoa. Lucky got ubat for him. Thanks Nurina ! After dinner kena lagi tunggu pakcik sorang tuh coz ada meeting..Ayya….

Woke up around 5.50am. Planned not to go to the transition area so early this time around. Went to the loo like 3 times.. Drank salt water, makan roti..  Did a bit stretching… Then cycled to transition together with Suu Eee, Esmen, Akey and Dino. Transition was already pack with OD participants. Macam pasar , except there was no ikan, ayam, and sayur lah.. Only the fishmongers packing the sardines to be sent to the sea.. hahaha… First time my ‘area’ at the transition sempit gile.. had to push the bike next to mine sana sikit.. ala, macam you push the hangers in your wardrobe if too many baju hang situ… Part which I would definitely hate most is after you penat2 susun your helmet and other gears, and then ada someone jatuhkan, and then tak letak balik. So, some tips to you all; don’t go too early to the transition, and make sure you double chack everything is in order before you head for the swim start. Or else during T1 you’ll be ‘where’s my helmet?’, ‘Where  the hell is my Oakley ????’

I must admit, triathlon is not only about racing and sporting.. its the social fun you experience everytime it comes to race day ! Especially race morning ! Banyak ‘open house’ i visited that morning. Hahaha.. Familiar face here, and there. And even better, Chan Wing Kai and Tey Eng Tiong was there at the swim start. No, they didn’t take part la. They took foto for us lah !! So kind of them !! Anyway, I did some warm up with Nurina.. Stretching sikit2.. Sikit2 je. Kept 1 PowerGel with me. Want to take them before swim. We had up to 5 waves, since there were soooo many participants per category. But Women categories had to combine with the 50++ age grouper for men. Lucky them. The last wave would be the relay category. Since i didn’t have as much training(for swim) like A Famosa, I planned to just swim, do more free styles, navigate !!!, and try my best not to stop/slow down so much..

Race starts. All the dolphines, piranhas and sardines jumped into the water. I’m the dugong, so had to stick slowly behind. Swam along the line/small red balls/buoy wuteva you call it. I usually sesat tah ke mana2 if didnt’t plan how to navigate.  1st 30ms, ayya, salt water already filling into my goggles.. Stop kejap to fix the prob.. and Again !! i think i stopped like twice or thrice.. hum.. but after that just couldn’t be bothered. Swam on. And ohh…ouch… who’s that tickling me.. owh…someone doing breast stroke.. and ouch !! sapa la plak tendang aku nieh.. That’s so normal la.. Lucky not mass start like in A Famosa Triathlon, together with the man. Imagine how long you have to wait before getting a smooth swim/no tendang2..  I saw Siok Bee after 2nd buoy, and 3rd buoy i was already swimming along with her..haha.. i never caught up with her during swim before..but this time , manage to lambai2 kat dia lagik !! hahaha.. uhmm..its either she slowed down, or i cepat sikit that day…huhu.. i didn’t see anyone else..like duh.. siok bee easy to identify coz she was wearing the blue-flower design tri suit by Zoot. Cantik !! (Sempat lagi tuh..)

See ! You can tell your swim time improvement by looking at the T1 foto. who’s in front or behind you.. and how far/near.

Rolling hills await. I enjoyed the bike leg. Zooming past i don’t know who.. tapi puas hati time potong relay people, and also the men age -grouper.  Worth the hill training. Haha.. One of the participants sempat lagi told me ; ‘You’ve got climber legs. ‘.. hari sebelum kat UKM, masa race, ada 1 guy tanya ‘you ambil rpm class ke?’.. it doesn’t matter you’ve got climber legs or not, whether you go for rpm classes or not, as long as you have sufficient quality training, kira bagus la.. I manage to make sure i change my gears as approaching the hill, and not when Climbing. Ada yang nanges kang.. so, do the right thing la…. kat kenyir,ada yang tukar gear masa climb..from super heavy to super light. next thing you know , you’ll be walking back to transition coz chain putus…

I realized after the u-turn, that Su Ee was behind me. and also Siok Bee. Major Kalam was ahead of me, but not for long coz after that said Bye Bye Bye to him..ahhahaha..  I didn’t know how fast or slow i was going coz battery meter out. I coudn’t go too fast coz i’ve to save the legs for climbs.. and i couldnt go too slow or else i would lose the momentum.  sekali sekala jadi marshall pulak masa kayuh.. ada hole sana sini, ada in coming cars yang tak slow down .. Oppp !!!!! Angkat tangan tanda stop. And then wave at the car to ask them to move on.. One time nearly missed this in coming van by inches. So, wuteva it is , safety 1st okay !?!

t2 : Also no prob.. but already felt tired a bit, plus it was getting hotter !!!  Run :And this year run route already change from London to Sahara.. previous run route had big trees along the road, serving as merciful shade and umbrella for participants. When the organizer/race director shifted the route to Sahara, all we could depend is on the waterstations provided along the route.. Bloody hot !!! And I didn’t put no sunblock on me.. tak bawak pon this time !! anyway, route ni senang sikit to see who’s at the front/back , the other side. After the runabout, saw Esmen ! Hah..caught up with him, and sayur him after the 2nd waterstation ! Browsing to the other side, I saw steph ! ayaa.. mest dlm 20-30minutes gap nieh !!! uhmm.. and then saw abu ..in his pink trisuit..pink kan abu ?? bike boutique la tuh..

Concentrate Julie..concentrate.. but at same time, boring jugak.. flat,hot and no mercy. Started counting how many people  I manage to sayur.. i only counted the men. Counting my age group too stressful lah..hahah.. coz tak ramai compared to other age group, plus you can sort of figure out your rank/position.. anyway, i think i sayured around 40-50 guys.. around that lah.. and around  3-4 galz sayured me..damn.. and this all happened after the u-turn !! why ??!! i’ll tell you… itu vaseline i spread all over the sole (of my shoe lah,,) except ad this part aku tak sapu.. the inner side,near the edge.. edge tuh dah le tajam..(nampak je soft).. and it rubbed, rubbed and rubbed.. painful…the last 4k i was already running like i don’t know what.. best way is to toe-run all the way.. ni tidak.. sebelah kiri toe, sebelah kanan my outer foot yg dok stride..,, picture below shows affected area.. (not my tapak kaki..)

Last 1km..finally..pakcik polis already give me semangat.. last 200m…passed Daniel, Major Kalam & Nurina’s son. Last 50m ! Sprint finish with this other guy, i dunno who. He bucked up after he saw me picking up the pace. I DID NOT see michelle looi in front of that guy !! So my target was only the guy in front of me.. there goes.. 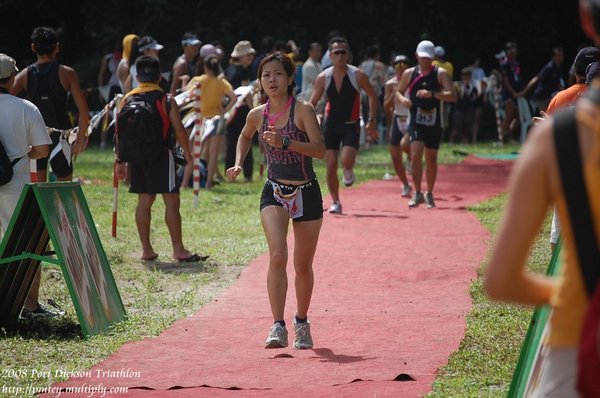 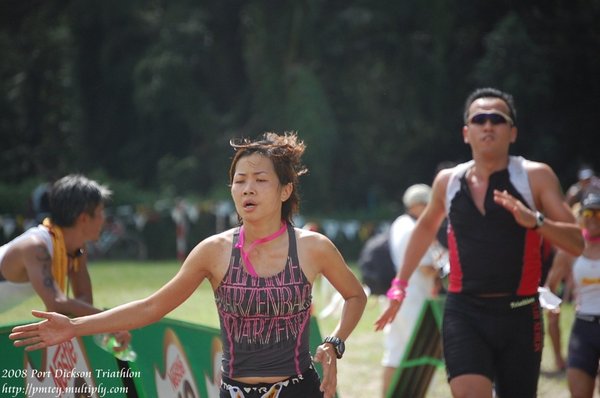 Medal presented by Dr.Sheikh Muzafar. Malaysia’s 1st cosmonaut. So proud !! Shook his hands and shouted to him THANK YOU !! What a race.. i enjoyed everybit of it.. !! Have to train much harder to be in the top 10 !!!!!!

Nurina : love your sporting spirit! never give up !

Siok Bee : i wasnt drafting you during swim.. happened to be behind you..and then next to you..and we came out of the water together !!!

Michelle : you definitely beat me this time.. a few seconds !! Congrats ! Till Kenyir !