A pigeon sits on the shoulder of former Pakistani Premier Benazir Bhutto just before the bomb explosions as she waves to supporters while taking part in a procession with party leaders upon her arrival in Karachi after ended eight years of self-imposed exile, leading a jubilant homecoming parade. (Below) Bodies lie on a road in front of a vehicle carrying of former Pakistani Prime Minister Benazir Bhutto after suicide attacks in Karachi, yesterday. Many people were killed, including 20 policemen. More than 400 people injured by two bombs near former Premier Benazir Bhutto’s truck during her Pakistan homecoming parade. AFP

Pakistan’s former Prime Minister Benazir Bhutto has been assassinated during a rally in Rawalpindi, near Islamabad.

With elections days away, Ms Bhutto had been campaigning incessantly, buoyed by the apparent support her party enjoys.

Moments after delivering her speech, she left the stage satisfied with the support she had received.

She got into a car to leave, waving to supporters moments before being attacked.

The suicide bomber caught up with her as she was leaving, exploding his lethal device. 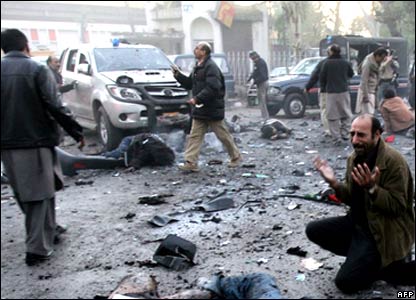 Supporters were stunned as they surveyed the carnage.

Dazed, the injured waited to be taken to hospital.

Despite knowing she was a target, Ms Bhutto had vowed to defy the threats.